Welcome to the All Faiths Network and City Interfaith

The All Faiths Network for the United Kingdom was formally established on 30 August 2011 after being in active operation since 1 December 2010, and has functioned continuously since that date.

We are registered with the Charity Commission as an incorporated body with charitable objects of the promotion of religious harmony for the public benefit, and work for positive, inclusive dialogue.

The All Faiths Network is open to people of every faith and belief that is recognised in law, such as under the Equality Act 2010, without discrimination.

We currently include about twenty-five beliefs and faiths, making us the largest coalition of different religions in the Britain.

All our member faiths are staunchly committed to the principle of religious equality under the one law of the United Kingdom. 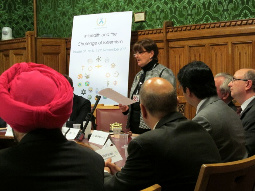